ABOUT | how you can help | how sweetwater can help | additional resources 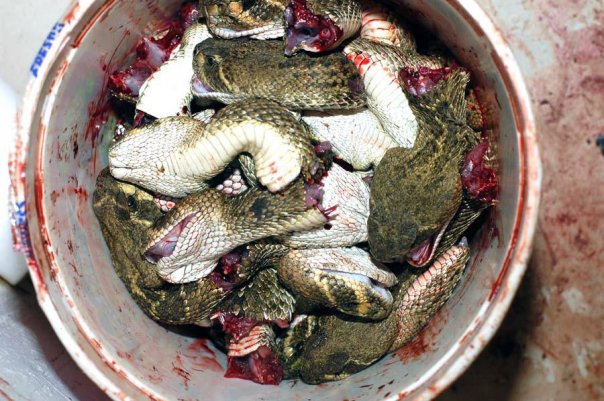 Is the roundup for real?

How is this legal? This seems more animal cruelty than anything.

The roundup is 100% legal. And yes, it doesn't just border on animal cruelty, it IS animal cruelty. Having a festival centered around the brutal killing of natural wildlife might have been acceptable in the 1900s, however it's now 2022, and it's just disgusting. It's time for humanity to live along side wildlife, not eradicate it for buck. Especially since we're continually encroaching and driving species to extinction every day. This isn't about overgrown populations and reduction, mother nature is pretty well armed to take care of that. It's about an outdated, barbaric, cruel Sweetwater tradition where the uneducated educate our children that killing animals for fun is fun. Oh, and a whole lotta revenue for the city. If there's one thing that city loves more than killing animals, it's money.

Is there really a kitten roundup?

No, there's not a kitten roundup, but there IS a rattlesnake roundup. And most of the practices on this site are pretty accurate as far as what happens at the roundup. Snakes are pinned down and decapitated on a wood block, which does not immediately kill the animal. Many times it takes them 3 or 4 whacks to completely sever the head, however this animal still feels pain long after decapitation. There's a (disturbing and graphic) video of a decapitated snake, still completely alert, flicking its tongue. Snakes have a very sensitive nervous system, and can absolutely feel pain. it may seem less cruel to some because it's a snake and not a kitten, but none of these animals deserve to die in such a brutal way for festival entertainment.

But snakes are dangerous and should be eliminated

Rattlesnakes are indeed dangerous creatures, but the likelihood of anyone being bitten is incredibly small. There are many myths about rattlesnakes that propagate generation after generation.It's time for that to stop for the good of the species and, well, we kind of owe mother nature one after how we've shit on this planet.

Snakes are primarily defensive creatures. They will not chase you, they will not "hunt you down". Almost all bites occur because the person bitten is willfully interacting with the animal, trying to catch it, relocate it, kill it, or simply dick with it. Many times alcohol is involved (insert surprised face here).

Generally speaking, if you leave them alone, they will leave you alone. A little education goes a long way, and less than that is what the participants and organizers of this show have attained. Imagine having something the size of three elephants staring you down in the face. Are you going to launch an offensive and attack it, or are you going to take a defensive posture and do everything you can just to stay alive? That's what the rattlesnake is, and that's what it's facing. It just wants you to leave. That's all.

And while it's adorable that the Jaycees think they are helping by milking the snakes of their venom, word on the street is that is just a front. Milking snakes for anti-venom is done in many other areas of the country, with captively propagated animals, and most (if not all) companies that actually use the venom require it to be from sterile, lab-like conditions. Not during a carnival with questionable hygiene, by buffoons with questionable hygiene. Remember, the usage is medicinal, and there are regulations around that. Regardless, you can probably get a lot more venom from the animal while it's alive rather than when it's dead, so why kill this precious resource? Oh, right, because it makes the town hella bank. Let's face it, nobody is traveling to Sweetwater to go to a MENSA meeting or watch the World Series of Chess.

What Can I do to help?

There are lots of ways to help out, depending on how much time you want to invest. At the very least, sharing this website on Facebook and facebook groups will help to raise some awareness that this type of thing still is happening. They'll come here because it's an atrocity against cats, and will be outraged.. and hopefully some people will still be outraged when they find out it's about snakes -- they're still animals, and coming from the wild, absolutely deserve our respect and to be left alone.

There are many organizations working at stopping rattlesnake roundups. Consider reaching out to these organizations, or joining these FB groups

You can contact the following people who have their hands in this:

What Can Sweetwater do to help?

Many cities have gotten with the times and have turned their Rattlesnake Roundups into non-kill festivals. It's really fairly simple; instead of capturing and killing the animals, take the revenue from this years' roundup and build a facility to keep and breed rattlesnakes. Create an area in it that is a safe, sterile place to milk the animals, and milk them humanely. And consistently over the year. And then do something legit and profitable with the venom collected. Learn the conditions required to have them successfully breed in captivity (it's not complicated) and create a sustainable way to have "roundups" focusing on the celebration and education of a very cool snake. Without killing them. Replace all of the snake meat and decapitated head statues with other foods and other trinkets that people can buy. Similar organizations, like zoos, normal carnivals, and all sorts of other businesses generate revenue without the mass genocide of a species all the time. It just requires a different mentality.

There are lots of areas on the Internet to learn more about the roundups. Thankfully, many roundups are shutting down, or turning into less harmful, more educational shows. There's no reason to shut down the Sweetwater festival, it just needs to change and get with the times.